Before trying the impressive virtual reality experience ‘De-composed’, we had the chance to play the ‘Italian mafia restaurant’ room at the Griffintown-located ‘Escape Masters’. Your first challenge will be to find the venue inside the labyrinthine building (don’t worry though, it is well indicated).

As you were eating in an Italian restaurant of Montreal’s Little Italy, you overheard a discussion about the loot they stole during a bank robbery. This raised your interest enough to come back in the evening in order to shed some light on this story. Equipped with a kit of various tools, you enter the place; but doing so, you trigger an alarm, and have now 60 minutes to escape before making some unwanted encounters. And before this, you will have to find back the loot! 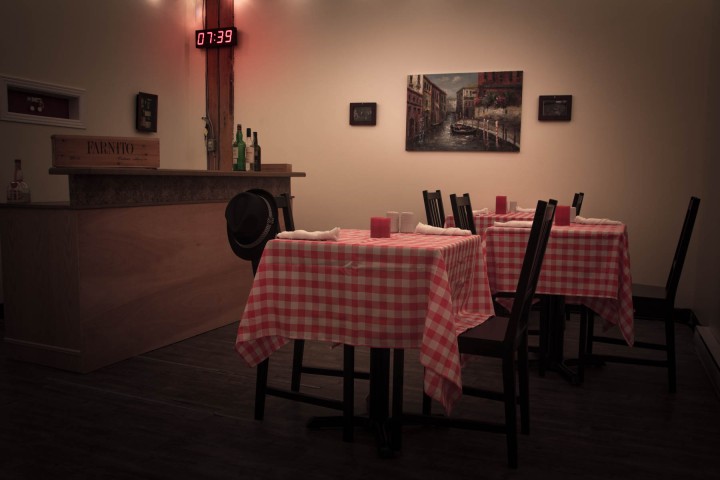 The immersion is simple but convincing enough: a dining room, a bar, and who knows? Maybe more… One element behind the bar was not very credible though – but our gamemaster Cristina told us that they were working on a more realistic one, which could definitely further the immersion. A special care was given to the musical atmosphere, which, as you will recognize quickly, fits perfectly with the theme. Another nice touch is that you have to make a choice at some point in the scenario – though it could have led to a more elaborate plot development.

The puzzles are nice – some relatively classical, but a few cleverly innovative. The strong asset of the room (like in their other room ‘The spy’) lies in its non-sequential puzzle structure: you can be quite sure that all participants in the team will be busy solving some puzzles at most times, and not get bored.

Finally, the welcome was relaxed and friendly. Before starting your adventure, you can chose how the gamemaster will help you in case you need it: either she can enter the room to give you the hint, or send a note below the door. The former method leads to a faster feedback, but the latter will less spoil the immersion, so we chose it without hesitation. Anyway, we didn’t need any hint from her to finish the room.

Overall, this is a classical but good escape room, and we had fun solving it. It should be easy enough to be doable by a team of motivated beginners, while still being enough of a challenge for a group of experienced players (if you are in this latter situation, three or four participants should be a good team size). The average sophistication of escape games is arguably lower in Montreal than in Toronto or Ottawa, but ‘Escape masters’ is definitely one of the recommendable venues here, where you are pretty sure to have a fun time.

If you liked this atmosphere, have a look at King of the Bootleggers at Casa Loma Escape series during your next trip in Toronto.