Hourglass Escapes is an escape venue conveniently located in Seattle’s city center. It was founded by Seth, who worked in the film and theme park industry for over 25 years, and could thus bring his knowledge to the world of escape games. They currently have two rooms (with more in construction), which are set in quite different environments: Tales of the Ghostly Galleon, a pirate room, and Rise of the Mad Pharaoh, an Egyptian room. Both have commonalities though. Most notably, each room revolves around a central object: a sarcophagus in Mad Pharaoh, and a couple of big chests in Ghostly Galleon. Ghostly Galleon is the first that we could play, after getting tattoed, as every pirate should!

“Come aboard the legendary ghost pirate ship of the Banshee Buccaneer! You start your adventure at Hourglass Escapes, where you will get tattooed, be fit for your pirate disguise and get sworn into the crew of famed oceanographer Jacques Cousteaudian, and then board the Ghostly Galleon itself. Then you have just 60 minutes to break the Buccaneer’s curse before you sink with the ship and become disembodied deckhands, doomed to swab the poop deck for all eternity! Only you can help this Ghostly zombie escape the curse!” (source) 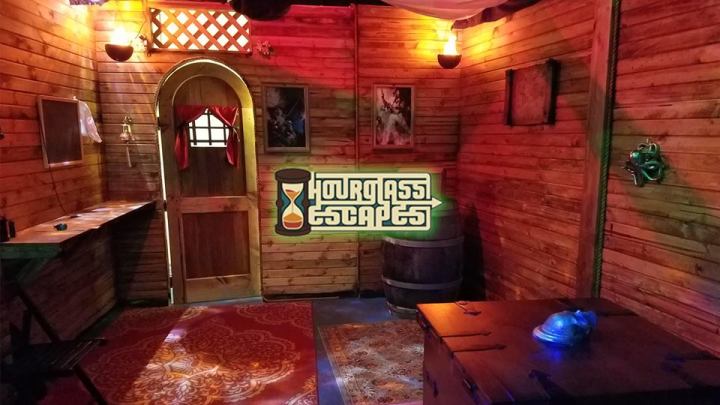 The immersion in the room was enhanced by a variety of sound and lighting effects, as well as a screen simulating quite convincingly a window view of outside – do not watch it too long if you’re prone to seasickness! There was a variety of nice items in the room, and a story unifying several of the puzzles. On the minus side, some electrical equipment could have been better hidden, and the second screen that provides the time does not really fit in the pirate atmosphere (but the owner is thinking about alternative, more immersive ways to show the remaining time). Finally, you can keep a doubloon you did not use at the end of the game, which is a nice souvenir of the whole experience.

There was a nice variety of puzzles, some slightly classical, and other more original. There is a special kind of lock that you will certainly love if you see it for the first time! The hint system is original: there are doubloons in many places in the room, and you can buy a hint for two of them. The item searching process was interesting, not always so easy. 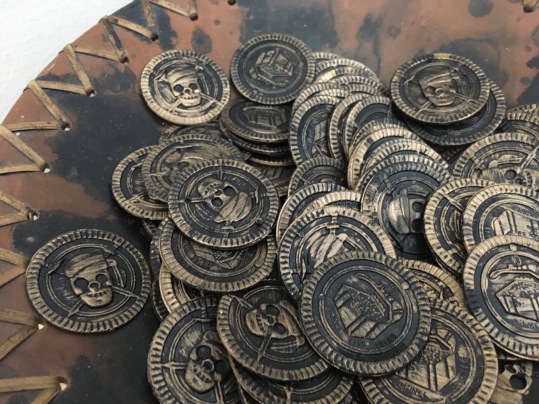 The gamemaster stayed in the room during the game in a contemporary outfit, which damaged a little bit the immersion. We asked him at the start of the adventure to suggest us to require a hint when we would be running late: this made the game smoother than having to guess ourself whether we were late or not (which is technically impossible, since we don’t know the room), and the gamemaster did that very well. I think this should be the default mode, so do not hesitate to ask for it.

The two of us exited the room with only few minutes left, having asked for three hints. The game was both challenging enough to be interesting, and not too difficult either. Overall, Tales of the Ghostly Galleon is a good-if-slightly-classical escape game, with a few original and interesting touches (the hint system, the window view provided by the screen…). Because most of the puzzles revolve around a couple of large chests, the game can be transported anywhere for you to play with – so that sounds like a perfect opportunity if you’re looking for an original team building experience delivered directly to your office!

Here are a couple of introduction videos:

Other reviews: Escape room tips (for the mobile version)