“After a wild night out in Las Vegas, you and your friends wake up in a hotel suite with no clue where you are or what happened. All you know is that you stole a lot of money from the Russian Mafia and they want it back NOW! You’ll need to put the pieces together of what happened last night and escape before they come to collect!” (text: Escape City)

Escape City is located in-between downtown Buffalo and Niagara Falls. They have quite a reputation in the escape world, so I made the long trip by public bus from downtown Buffalo. The Hangover is their most recent room, after a pirate story Over The Falls and a horror game Body Collectors, which both got rave reviews.

The fantastic immersion starts already in the welcoming hall, which has a sophisticated haunted house feel – not a surprise, since the creators come from the haunted house business and realized the Frightworld next door. The decor in the room is amazingly detailed, with a profusion of objects that retraces the crazy night you have just spent. Fortunately, the vast majority of those items are firmly fixed, avoiding you to add more disorder to the setting: never have I seen a more perfectly organized chaos! The window view from Vegas is incredibly realistic, and contrasts with too many escape games that feature poorly believable outside views. Refreshingly, there is a lot of humor in the room – a large part of it being targeted towards a mature audience, hence the 18+ rating of the room. The hints are provided through a screen and taunting, funny voices; hone your slang language skills before coming there! Finally, the last part of your adventure features a super immersive large hi-tech device that will make you feel like in a Hollywood movie!

The puzzle structure is as finely tuned as the immersion. You start separated in three groups, and your first task will be to save one of your colleagues from an unfortunate – and hilarious – situation. The puzzle structure is then largely parallel and very well adapted for large groups, who can divide into several subgroups, each working on a different puzzle. This room is a model of coherence: on top of very sophisticated mechanisms, there are a few traditional padlocks, but this totally make sense here – proving that there is still a future for digit padlocks when they are used in the right way! 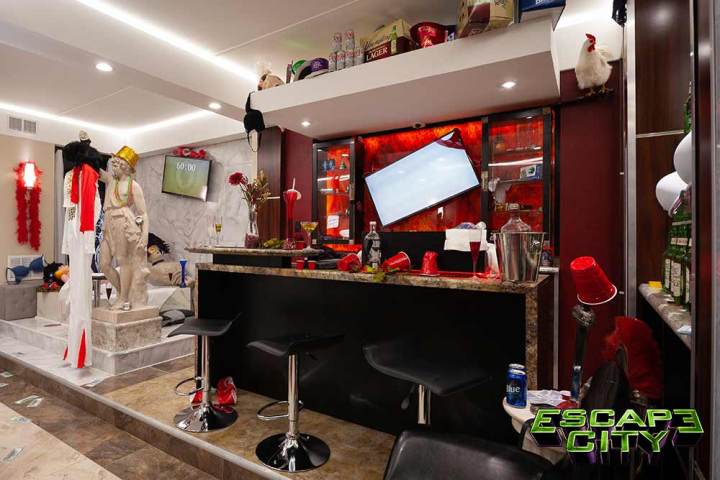 Finally, the welcome and debriefing were very friendly. The gamemastering was on point, with a profusion of hints given to us that ensured that the room remained always exciting and never boring. I met afterwards Bryan, one of the managers, who is very perfectionist and constantly looking for improving further his game. The only thing I could imagine that could make the game even better would be the intervention of actors, but it’s already nearly perfect as it is.

This game was a model and I would urge every escape game designer in the world to go there to get a sense of how well-designed an escape game can be. It entered into my top 3 of the US rooms I tried, with The Storykeeper in Seattle and Jurassic Escape in DC. My only regret is that my stay in Buffalo was too short and I didn’t have time to play their other rooms. If you’re visiting Niagara Falls or Buffalo, do not miss this masterpiece!

UPDATE (2019/09): Read here out test of Over The Falls and Body Collectors at the same venue, two other excellent games!

No other reviews found (let us know if you reviewed this game, so that we can list you here)

A video preview of the room:

One thought on “Escape City Buffalo: The Hangover”