I had always wondered, when looking at the Epsilon escape’s website, whether their welcome hall is as impressive as it appears from the pictures. Going there, I finally had my answer: no – it is actually more impressive! With 500m2 in a former shoes store, this is probably the most spacious and luxurious escape game venue I’ve ever seen.

Anyway, as pleasant as it is, you did not come here only to enjoy the welcome hall.  Sipping a soft drink or a tea while comfortably seated on a chesterfield couch, you will read a booklet telling you more about Doctor Epsilon. He was visiting the Sinople clinic in the early 1990s, and realized the potential of the patient of room number 8. Because of his unorthodox therapeutic methods, the doctor was quickly forced out by the administration, but he managed to leave some hints for the patient to escape. Your team will now play the patient of room number 8 and try to escape in less than 70 minutes (the fact that all members play the same patient should incidentally give you some hint about the nature of his psychological trouble – though this part is not really developed in the scenario).

You will enter blindfolded into the first room – a classical trick, but that always improves the immersion. You will then discover several rooms featuring different parts of the asylum, each with their own very well-reproduced atmosphere. The gamemaster can send you hints displayed as subtitles on a retro TV program, signaled by the sound of an old-style modem – a great idea that also improves the immersion. A couple of events will happen during your adventure, giving a bit more flesh to the scenario. Every detail reflects quite well the 1990s atmosphere – from the musical immersion to some items of that time.

The puzzles are varied, and a couple of them involve an impressive device located in the second room. Another puzzle in the second room required a simple manipulation, which appears obvious once you found it, but was quite original. The searching process is not so difficult but innovative, and your perception skills (not only visual!) will be tested. Note that there are not so many puzzles though, and on a few occasions, all of us were concentrated on the same puzzle; so if you are a team of escape game enthusiasts, five players might be slightly too many.

Finally, the welcome was wonderful and the gamemastering well-managed, with hints being provided at the right time. 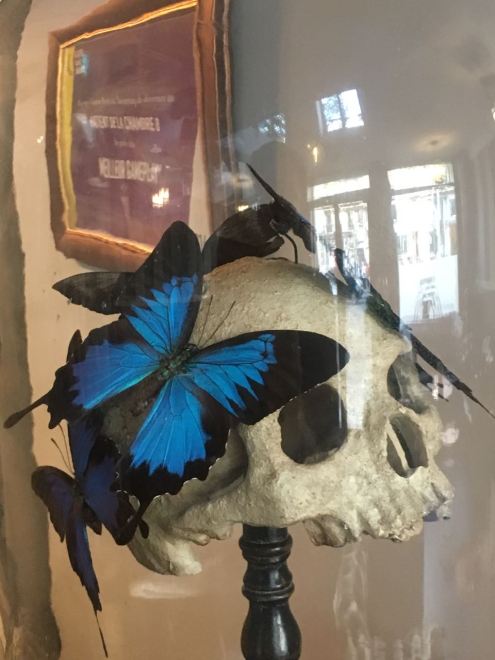 We exited 12 minutes before the end of the 70 minutes. Overall, this is a very polished escape game, and great attention has been given to any details, up to the very end of your experience, as each of your team members will receive a printed photo – a first for me. Of course, the comparison with One Hour’s ‘Lost Asylum’ comes easily to mind, but the two games are not so similar: this clinic is much less anxiety-provoking than in ‘Lost Asylum’.

The two founders of the venue have quite diversified professional activities – Florent Steiner cofounded the biggest French dating website (adopteunmec.com), and Guillaume Natas recently launched the first Québec-poutine restaurant in Paris. This polyvalence also appears in their escape-related activities: they started recently to organize board game night events; they offer personalized escape games; and together with their escape game manager Clémence Gueidan, they launched a few escape-game-books (in French).

More classically, their venue is a perfect place for company team-building activities: you can find upstairs a really huge space (100 m2) for organizing cocktails, and their game is available in two identical set of rooms, so it can accommodate up to 10 people at a time – and soon 20, when their second game will be available. This second game will continue to retrace the story of Dr. Epsilon, in a toy factory destroyed by fire, and I’m really looking forward to discover it!

Here is an interview (in French) of Clémence Gueidan, the manager of Epsilon Escape.

Other review (in English): The Logic Escapes me

2 thoughts on “Epsilon Escape: The Patient of Room 8”