Artimus is this quite recent venue in Paris where we had the chance to play the excellent Ultimate Madrigal. From outside, Artimus might look like an old-fashioned doctor cabinet:

Inside, you might think you have entered a cryptozoologist dream: 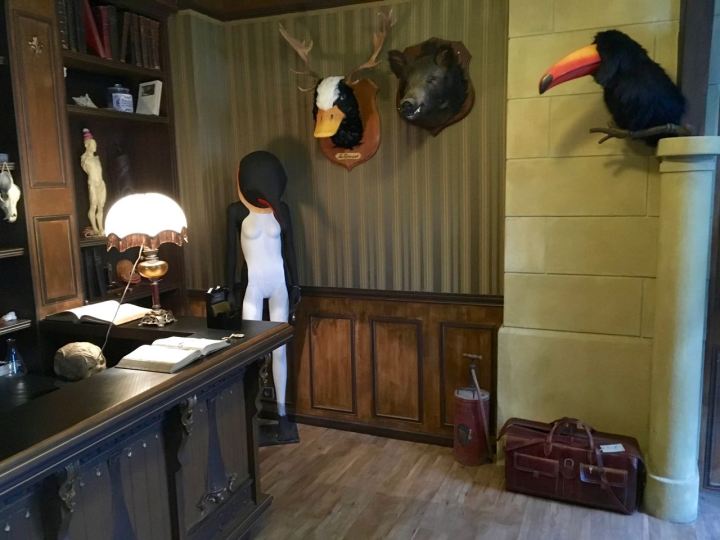 But you will soon discover that it is just a cover for a time travel company that will send you across space-time to investigate unsolved mysteries.

This time, you will be sent to 1913: “Many people have been disappearing along the way of the Tyfrosi circus. His new director, Aleister Blache, the director of the very popular Freak Show, hide a fantastic creature explaining this phenomenon… You are sent there as he is away, to investigate the case and bring back the key of the mystery.”

Artimus is definitely one of the kings of immersion in Paris: you will evolve here in an early-century atmosphere with steampunk touches, that fits perfectly with the general atmosphere of professor Artimus cabinet. Going through the different rooms – from outside the circus caravan to its deepest innards – you will evolve through a beautiful variety of settings and sounds, including a very beautiful element in the latter part of the game that should delight all fans of Jules Verne. There is also a real scenario, and you will have to analyze the hints across the game to solve the mystery.

The number of puzzles was limited but they involved a nice variety of mechanisms, with very few padlocks. Only one puzzle at the end of the second room let us a bit skeptical and could in my opinion be improved.

Like I said in my other review, the welcome here was wonderful, and Artimus has simply the best pre-game experience I’ve ever had in an escape game – not only in Paris, but anywhere in the world. The gamemastering was attentive, though maybe we received a little bit too many hints on a couple of occasions (we exited with 15 minutes left, so we would have had time to search a bit more thoroughly before receiving help). There was a small mistake in the room reset too, but it did not have any significant influence on the game. Overall, this was a very good hosting work.

Between ‘Ultimate Madrigal’ and ‘Freak show’, one can say that Artimus definitely worked on the originality of its scenarios and atmospheres, by contrast to the ultra-classical mad scientist lairs, prison evasions or murder mysteries. So which of the two should you play? Without hesitation, I would say: both. If you have to chose one, though, you might decide depending on the atmosphere: early 20th century with steampunk touches, or luxurious Renaissance villa? I also have a slight preference for the puzzles in ‘Ultimate Madrigal’. Finally, the rooms are smaller in ‘Freak show’, and the puzzle structure is largely sequential, so I would recommend to be at most 4 players to play this one – whereas ‘Ultimate Madrigal’ can easily accommodate 5 players. Don’t lose a minute, your missions across the gates of time can’t wait for you! (or would that be a temporal paradox?)